Trauma is a body wound or shock produced by sudden physical injury, such as from violence or an accident, and it is a serious public health problem with significant social and economic costs. In trauma care, a timely provision of care is a critical factor to a patient’s survival. This is often highlighted by a well-known phrase, “golden time.” The Korean Ministry of Health and Welfare (KMHW) has been rolling out the national trauma care system since 2012 with a plan for completion in 2017. A recent publication, to which two KAIST researchers contributed, provides a glimpse of how mathematical modeling and computer simulation helped the planning of the national trauma care system.

Achieving golden time for trauma patients require sufficient access to quality trauma care. Providing access to trauma care has multiple aspects to account for such as geographic coverage, affordability, and acceptability. In the planning study sponsored by the KMHW, two researchers in KAIST’s Department of Industrial and Systems Engineering worked with public health and emergency medicine experts and practitioners to establish a nationwide trauma care system in Korea. Specifically, they worked on the geographic coverage and accessibility aspect of the system, in which the number and locations of trauma centers and helicopter ambulances are determined so that trauma care is made accessible to the greatest number of people in the country. A sophisticated mathematical model, called a probabilistic location model, was developed and was solved by using the algorithm developed by the team. Solutions obtained from the mathematical model have been validated by computer simulation by using real trauma case data.

The modeling part of the study was pursued for further theoretical development through international research collaboration, which was published in Operations Research, June 2014. This work was received in the academic community as a successful application of operations research, and the authors of this paper were presented with the 2014 Pierskalla Award by INFORMS, which is a prestigious award that recognizes excellence in applications of operations research and management science to improving healthcare. 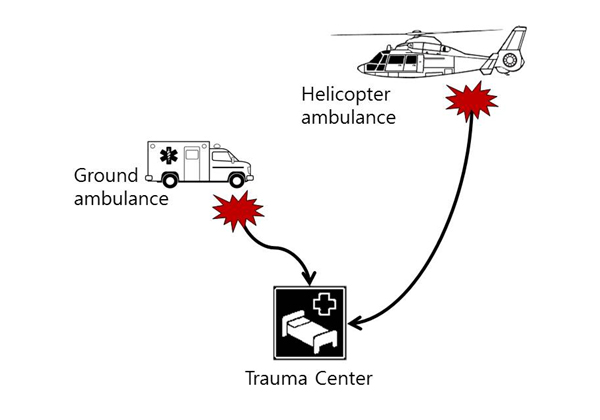 <Figure 1. A trauma patient can be transported by a ground ambulance or helicopter ambulance, depending on the proximity of available trauma centers.>